A vision to form an advanced pharmaceutical manufacturing cluster in the City of Petersburg first took root in the Virginia Commonwealth University College of Engineering’s Medicines for All Institute, or “M4ALL”. B. Frank Gupton, Ph.D., Chair of VCU Engineering’s Department of Chemical and Life Science Engineering and the Floyd D. Gottwald, Jr. Chair of Pharmaceutical Engineering, is the CEO of M4ALL. He is also a co-founder of Phlow Corporation.

Before the COVID-19 pandemic hit the United States, Dr. Gupton realized many Americans probably were not aware of where their medicines came from, or how vulnerable the nation was in relying on foreign nations to supply its pharmaceuticals.

“These are huge problems that are occurring which aren’t even on our radar screen in the U.S. I won’t say there have been positive things resulting from COVID-19, but it did shine a light on our vulnerability with regard to having access to these drugs,” Gupton explained.

Focus on Innovation and Quality 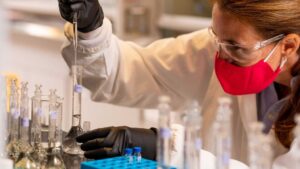 These problems have existed for years, partly because of the conventional drug development model in the U.S. For pharmaceutical companies, the cost of active ingredients is usually a small percentage of a drug’s selling price and typical manufacturing processes can generate huge amounts of waste, Gupton said.

“The challenge is that pharmaceutical manufacturers should think differently about this — and that’s one of the things that has helped us in getting our process taken up — the whole idea about the carbon footprint of these processes and how this is becoming an important issue,” Gupton said.

“So, now, we’ve come in and we’ve said, ‘Let’s look at how we can reinvent new chemistry, how we can develop new manufacturing platforms that will allow us to be cost-competitive on a global basis with anyone else.’ That’s our objective.”

The Plan for Petersburg

Until just over a year ago, there was little pharmaceutical manufacturing in Petersburg. A former Boehringer Ingelheim Pharmaceuticals facility was there, and Gupton had worked at the facility 13 years before joining academia.

“So, when COVID-19 hit, it was sort of a unique situation where we had this unmet need and we had this available capacity down in Petersburg, which basically coalesced around this idea of onshoring pharmaceuticals back to America. The other thing that was interesting about it was that we had started these discussions with our other partner, Civica Rx, probably a year earlier,” he said.

In May 2020, Phlow Corporation, a U.S.-based, public benefit drug-manufacturing corporation, received federal government funding of $354 million for advanced manufacturing of the nation’s most essential medicines at risk of shortage, including medicines for the COVID-19 response. This project was funded by the Biomedical Advanced Research and Development Authority, which is part of the office of the Assistant Secretary for Preparedness and Response at the U.S. Department of Health and Human Services.

The total contract awarded to Phlow was up to $812 million, which includes a four-year base award of $354 million, with an additional $458 million included as potential options for long-term sustainability. Along with its strategic partners, Medicines for All, Civica Rx and AMPAC Fine Chemicals, Phlow has initiated manufacturing chemical precursor ingredients, active pharmaceutical ingredients and finished dosage forms for essential medicines to treat hospitalized patients with COVID-19-related illnesses.

“When the pandemic hit and we were asked to try and develop a blueprint for what we could do to be able to onshore pharmaceutical manufacturing, I pulled the Civica folks to the side and asked, ‘Why don’t we do this on an end-to-end basis?’ Because, there’s plenty of acreage down at the Petersburg site to be able to make this a reality.” Gupton said.

“I see this region evolving into an epicenter for this whole technology, for reinventing how drugs are produced in the 21st century,” said Gupton.

With regard to the Gateway Region’s efforts to provide a sustainable and robust supply chain, Gupton pointed to how this cluster is making the starting materials, the active ingredients and the finished dosage.

“I don’t know if you’re a fan of Malcolm Gladwell, but I read a lot of his books and one of them is titled, ‘Outliers’. It’s about how people are uniquely positioned to be able to meet an unmet need in the marketplace at a certain point in time. I feel that’s very similar to what happened to us.”

The #VGR Team is so happy everyone enjoyed themselves at our #REDO's 2022 Annual Meeting. Together, we're all "Uniting our region for #economicprosperity". And we're here to ensure that #economic momentum never subsides moving forward, either — not here.