Local businesses and residents enjoy the benefits of Virginia’s stable tax structure and tax rates, cost of living and other business costs that in many cases are far below the national average.

Virginia has low utility rates, workforce and building costs, contributing to the region’s attractiveness from a cost standpoint in comparison to other locations. 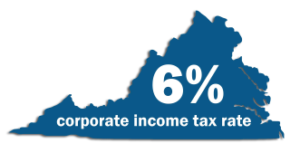 Virginia’s tax climate and cost structures has earned it a consistent place near the top of “best states for business” rankings. This consistent recognition comes from the consistent tax structures. For instance, the 6 percent corporate income tax rate has not increased in more than 40 years.