The region consists of five counties and three cities in Central Virginia. The area, which represents the southern half of the Richmond Metropolitan Area, is locally known as the “Tri-Cities” area. Each distinct county and city has a range of available resources for residents, visitors and businesses.

Learn more about the Gateway Region by selecting any individual community.

Chesterfield County, located on the I‑95 corridor between Richmond and the Tri-Cities, has one of the largest populations and employer bases in the metro area. The county is one of Virginia’s fastest growing communities due to a robust and diversified economy, a highly skilled labor force, and an expanding highway and transportation network. With a large selection of outdoor, sports and historical recreation, combined with a great school system and aggressive investment in business parks and infrastructure, Chesterfield is an ideal location for families and employers alike. 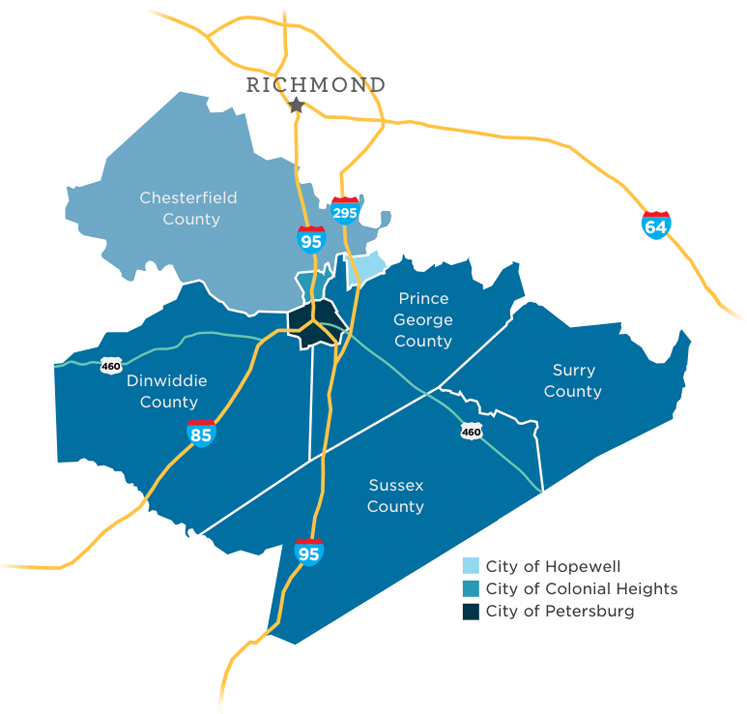 The City of Colonial Heights is situated on the Appomattox River and on I‑95 near the intersection of two other interstate highways. The “colonial” in the city’s name is not random as the city’s history dates back to before the American Revolution and served as a key headquarters location during the Civil War. The city also serves as the retail core of the region as it’s home to Southpark Mall and the surrounding retail destinations, combined with the vital commercial corridor on U.S. Route 1 between Richmond and Petersburg. The central location enables its retail importance and its residents to access the full extent of employment opportunities in the region. In recent years, the completion of the Appomattox River Trail has added an exciting community outdoors asset.

Dinwiddie County, a 502-square-mile community, is strategically situated at an important highway crossroads of I‑85 and I‑95 and railroad crossroads of Norfolk Southern and CSX lines. Not only is it an important freight crossroads with major distribution employers such as Walmart and Amazon.com located in the county, but it has a growing general aviation airport and serves as a great housing location with access to employment opportunities throughout the MSA. A primarily rural and suburban county, Dinwiddie offers an array of significant recreation amenities including Lake Chesdin, Virginia Motorsports Park, Pamplin Historical Park, and more.

The City of Hopewell is located at the confluence of the Appomattox and James Rivers. The 11-square-mile inland port community is on I‑295 with quick access to I‑64, I‑85 and I‑95, making it an excellent location to serve East and Midwest markets. The strategic river location was once considered for an early English colony, later served as an important Civil War staging area and then munitions depot and now industrial production center for large companies such as WestRock, Ashland and Evonik. Besides its importance to local industry, Hopewell has experienced concentrated revitalization efforts in its vibrant downtown community, bringing new recreation and business opportunities.

The City of Petersburg consists of 23.1 square miles located just south of the Richmond area. Bordered by the Appomattox River, the city is at the junction of I‑85 and I‑95 and two mainline railroads, Norfolk Southern and CSX. As an important crossroads throughout history, Petersburg is known for its rich historical background, which shines through in the Postbellum and Edwardian architecture widely present in the city’s downtown area. In recent years the city has been a home for many film crews using the city as a backdrop for movies and shows such as Steven Spielberg’s “Lincoln” and AMC’s “Turn.” Petersburg’s downtown continues an amazing revitalization, spurred by growth of nearby Fort Lee and the unique housing opportunities in renovated warehouses and historic homes, and the accelerating activity of local small businesses and entrepreneurs. The city is home to festivals and monthly arts events throughout the year.

Prince George County is comprised of 276 square-miles located near the James and Appomattox Rivers with convenient access to Interstates 95 and 295 and U.S. Route 460. The County is bordered by U.S. Army Fort Lee, a major U.S. Department of Defense training facility for logistics, culinary and ordnance specialists. In the last decade, Prince George has become known for its concentration of activity in the advanced manufacturing and aerospace industry. With the 1,000-acre Crosspointe Campus and the state-of-the-art R&D facility Commonwealth Center for Advanced Manufacturing and an attached advanced manufacturing apprentice center, the county is well-positioned as the center of the region’s future industry. It’s also home to major distribution facilities for Standard Motor Products, Food Lion, and more, and has its fair share of historic, waterfront, and agricultural tourism sites, as well as suburban and rural communities for the local workforce.

Surry County is a 306-square-mile county located on the James River in southeastern Virginia, with unique location attributes that position it well for energy production, including an existing nuclear facility, and for manufacturing, especially agriculture products such as wood pellets.The county’s workforce comes from the Hampton Roads and Richmond MSA to the East and West and from Williamsburg just a ferry ride North. Besides serving as an energy, agriculture and production hub, Surry is popular for residents seeking unique waterfront housing and small town and rural communities.

Surry County is known nationwide for historical landmarks like Bacon’s Castle and Chippokes State Park, and nearby Jamestown and Williamsburg. The waterfront location affords access to multiple natural refuges and parks and boat recreation on the river. A growing winery location, the county also produces large hauls of peanuts, cotton and soybeans each year for the state.

Sussex County is 496 square miles located along I‑95 south of Petersburg and strategically positioned between the Richmond-Petersburg and Norfolk-Virginia Beach-Newport News metropolitan areas. This central location gives Sussex businesses the unique opportunity to draw workforce from both areas, and also for residents of Sussex to easily travel to both areas. Those sticking around the county will discover quiet farmland homes, small town life, historic attractions, and numerous wildlife observation and nature trails, hunting and shooting opportunities. A significant lakefront Airfield 4‑H Conference Center offers outdoor activity space and conference facilities for individuals and businesses.