Virginia’s Gateway Region’s geographic location brings a lot to the table for new businesses considering locating to the area or existing businesses looking to expand. For different reasons, tourism brings out a lot of potential customers to the region. One example is a truck and tractor museum in Colonial Heights that people from all over the world come to visit.

Keystone Truck & Tractor Museum, conveniently located just a half hour from the state capital, encompasses over 75,000 square feet. The not-so-ordinary museum is very interesting to say the least.

Dating back to 1917 through 1960, Keystone’s private collection, with hundreds of antique tractors and old trucks on display, is self-funded along with the museum itself. They have also received several donations to their collection, but the majority of them were purchased by founder Keith Jones.

Jones and museum curator Alan “Bones” Stone delight guests from across the globe who come to see the museum with hospitality and appreciation of the rich heritage of agriculture and automotive transport. 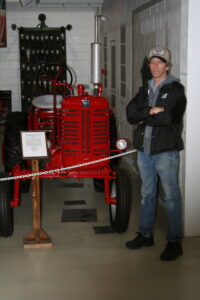 Rare tractors such as the UDLX Minneapolis Moline — of which there are only 25 others that are known to be restored today – the Sampson Jumbo, Silver Kings, the Nuffield and a Graham Bradley farm tractor, plus a lineup of the Massey Harris, Massey Ferguson, Farmall, Case and the Oliver farm tractors are just a few of the antique agriculture and automotive transport treasures hidden in this museum, which is situated off I‑95 at Exit 53 on West Roslyn Road in Colonial Heights.

Two maps, one of the United States and the other of the entire world, can be seen as you walk into the museum, showcasing where people have travelled from to see Keystone. People from every single continent and nearly every country in the world in addition to all 50 American states have travelled to Colonial Heights to see the sights.

“Quality of life and fun tourist attractions are an important factor in economic development, as they help sell the region to business and industry,” said Keith Boswell, President & CEO of Virginia’s Gateway Region Economic Development Organization.

Locally, tourists coming to visit the museum have numerous accommodations in the nearby Tri-Cities area, such as the Comfort Inn, Hilton Garden Inn, Holiday Inn, Hampton Inn and the newly opened Extended Stay if they are staying in the region over night. In addition, there are many retail stores, including an indoor mall and restaurants to visit during their stay.

The city is nicknamed The Center For All Things Retail. “Per capita, Colonial Heights has the largest number of restaurants in its eight square miles than anywhere else in Virginia,” said Karen Epps, Colonial Heights Director of Economic Development.

Jones and museum curator Alan “Bones” Stone delight museum guests with their hospitality and appreciation of the rich heritage of agriculture and automotive transport.

The museum uses other methods of generating revenue besides providing tours for guests. While Keystone opens its doors to anyone who wants to rent out space for holding functions inside of the 70,000 plus square-foot facility, there have also been events attracting large numbers of people such as political rallies and association events.

Keystone Truck & Tractor Museum has only been around for roughly 10 years, but they are looking ahead into the future with a positive outlook. One visit is never enough because new additions to the collection happen regularly. 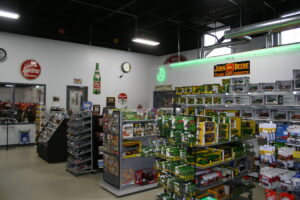 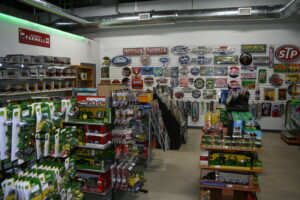 “We’re just getting started here, really, you know this thing is getting some national recognition — we tied in 2019 for the number one museum in Virginia with the Virginia Museum of Fine Arts,” Stone points out. He also mentioned that the Mayor of the City of Colonial Heights has been easy to work with.

The self-funded museum has engaged in a number of advertising campaigns, too, increasing their awareness. They have two billboards on I‑95 on each end of the city.

They’ve advertised in Pennsylvania as well as numerous national tractor magazines such as Red Power, the Green Machine, John Deere Magazine and Fire Truck Magazine. Their best ad was placed in Cooperative Living Magazine, of which Stone said has a circulation of a million households across the state from the edge of Maryland to the edge of North Carolina. A new bright digital sign has been added, and is visible to all traveling north or south on I‑95.

Are you following @IEDCtweets? We hope you are starting conversations locally with your community! #EconDevWeek22