From various different livestock being raised and a diverse variety of produce being grown, to unique agribusinesses, agriculture remains and continues to be the foundation of growth and economic prosperity in the Gateway Region. For Virginia Agriculture Week, Virginia’s Gateway Region spoke to local farmers in the area.

Over in Dinwiddie, VGR spoke with Randy Everett, who runs a farm where he grows tobacco, peanuts, cotton, corn and soybeans.

“We contract our tobacco with UniversalLeaf’s North American headquarters right outside of Rocky Mount, North Carolina and that’s where we deliver it to,” Everett said. “We market all of our corn through Smithfield Foods in Waverly, and that’s a good market because they feed it to swine. And then we market our soybeans through a couple of different elevators.”

What is the impact that agriculture has on the economy? Everett said that if you were to combine everything, agriculture production is the largest business in Virginia as far as producing goes.

“It’s significant — what most people don’t realize, is the amount of money that we spend just on an acre of crops. We spend over $3,000 an acre just to raise tobacco, so that’s a lot of money that we’re putting out there and spending, and not to mention all of the people who are employed within that network of suppliers and grain markets, etc.”

When asked about what Virginia Agriculture Week means to him, Everett said the pride it gives him to continue a tradition that was born here, and to do an exemplary job at it.

“I take pride in growing crops here in the Commonwealth … this is where farming started in the United States, so I think we have a tradition of excellence. Our products have always had value-added quality. And I aim to do that on my farm, I want to build that reputation of being the best.”

He said the other thing that sets the Old Dominion apart, especially in the Gateway Region where peanuts, cotton and tobacco can be grown versus other regions in the Commonwealth, is the diversity of crops here in Virginia.

“If you go out west, all you’re going to see is corn and soybeans. The diversity of our farm is a big challenge, but I embrace that challenge. I feel like that diversity is a risk management tool for me, you know I don’t have everything in one part of the bulls-eye — I spread out my risk with different crops as far as rain fall and weather patterns go.”

“Over the years, the diversity is how my family has been able to make it through hardships.”

Also in Dinwiddie, is a Gateway Region staple. Richlands Dairy and Creamery has roots in Blackstone, Virginia, with its ground first being grazed dating back to the 1700s. Originally only a dairy farm, the family announced the expansion of its operations in May 2018 with the groundbreaking news that they’d be opening a creamery on the land, which happened in June 2019. With Richlands’ expansion in adding its creamery to the dairy farm, the business now provides a value-added good for their customers, ice cream. Yes, delicious homemade, right off the farm ice cream.

While this sort of expansion helps to keep the farmland in the family who’s worked it since 1917, Richlands’ on-site production of a value-added good also supports business viability, making it stand out as one of the only success stories of its kind in the Commonwealth. Virginia only houses six commercial dairy processing plants, and with Richlands’ addition of its creamery in 2019 in combination with its dairy operation, it’s able to produce ice cream while sourcing the fresh milk from its own farm — how much more value can be added than that?

“I think local is becoming on target to outpace organic, and I think you see that in Dinwiddie and the surrounding counties — that’s not just an urban trend … because people want that connection back to the farms, so when they’re coming here, they’re coming here because they want to see the farm,” said Coley Drinkwater, owner of Richlands Creamery and director of marketing and sales. Winemaking and agribusiness establishments in Virginia have been on the rise, and so has their creation of increased agritourism destinations. Hampton Roads Winery, in Surry County, has introduced the winery and vineyard business to the Gateway Region. 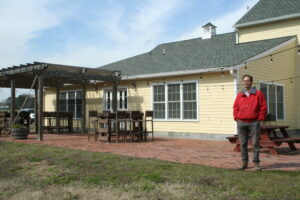 When David Sheldon and his wife, Diane, began their retirement while still living in Boston, Massachusetts, starting their own vineyard and winery was already an idea they had been seriously considering – now they needed to find the right location.

Sheldon found a piece of property on Route 10 near the Town of Surry. He bought the land and started the beginning stages of what is now a part of Hampton Roads Winery. Sheldon says he realized he needed to expand his business and add more land needed for its operations, so with assistance from a local real estate agent, he came across a 40-acre parcel of land in Elberon on New Design Road suitable for farming grapes.

In terms of being geographically located near their customers, Sheldon said “there certainly has been a shift over the past year on where our customers are coming from. Tourism originating from Williamsburg was our greatest market, and then COVID-19 came and tourism fell like a rock. As you can see by the latest statistics, Richmond and points west are now making a major contribution. Prior to COVID, these wine drinkers had typically gone west to Charlottesville.”

“The ‘new tourism’ not only includes the out-of-staters but also those that choose to stay close to home and see what Virginia has to offer,” he explained. Farming is such a huge part of this region, it would be impossible to fit them all in one story, but to all of the farmers here working hard to keep things moving: VGR sees you and appreciates everything you’re doing. Happy Virginia Agriculture Week, Gateway Region!